How a Portrait Evolves

This painting was painted from a photograph and my memory. It took me a long while to complete. Not having the subject in front of me, made the project harder (and taught me that my memory isn’t perfect).

People sometimes expect a painting to look like a photo and want the painting to be a literal copy of the photo. I am showing you a piece of the process so that you can see that I don’t copy the photo and I don’t take measurements from the photo.  When painting from the photo, I use the same process that I would with a live subject.  I still move around the canvas in a loose fashion, trying quickly capture the essence of the subject (before he tires) and trying to work all sections of the canvas equally, as I pin down where all the objects within the painting will be located. 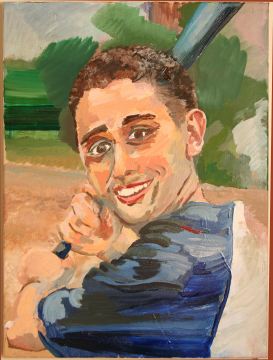 This painting started out very smoothly. Very early on, while the image was just beginning to emerge, it already looked like Joe. As soon as Joe’s eyes and smile were sketched in, the painting resembled him. The first photo of the painting was taken at the end of day one.

On that first day, I was very pleased with the painting’s composition and with colors and energy. I found it interesting that the dirt in the ball field, when hit by the afternoon sun, was nearly the same color as tanned skin. I could see that it was going to be easy to capture Joe’s personality, but I didn’t yet know what I was going to do with the green mesh tarp that was in the background. I toyed with the idea of making it more transparent so that I could pick up some of the vertical lines of the building in the background across the street. It was clear that texture would be important in this painting and that it would be mostly texture that allows the viewer to distinguish the arms from the dirt in the ball diamond.

I had fitted the subject to the canvas and he was now out of proportion. The hands were clearly too big and yet I liked where the hands were placed. And if you looked carefully, the upper portion of the bat appeared to be not in line with the lower half. I decided to keep the hands where they were and the same size.   This meant lengthening the arms and eventually enlarging most parts of the figure.

Over the next few months, every item included in the painting other than the hands was to move at least once. As I worked on the painting, I decided to zoom our focus in more on the face. I also realized that his head was originally angled wrong. In the beginning, his head was placed so that he was in conversation with the audience, rather than a baseball pose. So I changed both the angle of the head and the bat, and enlarged the whole figure. This meant that the left elbow is now partially off the edge of the painting, but my goal of using the elbow, arms and bat to define a 3 dimensional space was still accomplished. 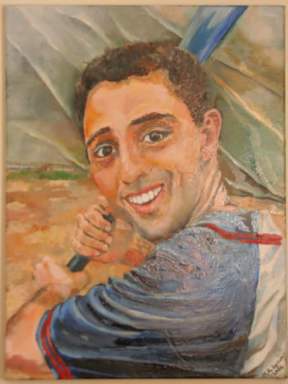 The true background is a chain link fence covered with a dull green mesh tarp.   With the figure larger, it did not make sense to include any of the landscape that is partially visible through the fence. It would have been a distraction. So instead, I accentuated the folds and drapes in the tarp. These folds mostly run at right angles to the bat and counter balance that strong diagonal. I also added highlights to the top corners of the tarp that echo highlights in the opposite corners so that again there is harmony in the diagonals.   Your eye can enjoy this painting on a 2-dimensional level or on a 3 dimensional one.